From Wiki of ZZT
Jump to navigation Jump to search

All non-standard values for P1 (from 9 to 255) appear to produce a bear that does not respond to the player's position at all (perhaps it is hibernating). 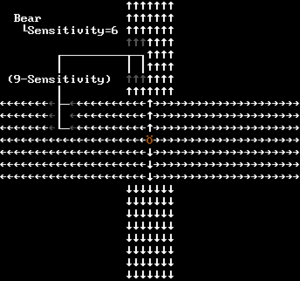 A diagram showing which direction a bear will move, given the player's position.
Retrieved from "https://wiki.zzt.org/w/index.php?title=Bear&oldid=422"
Category: